On Saturday 21st September eight teams competed for this Mixed Triples event which had been postponed from July due to rain.

The preliminary rounds produced 2 finalists with near identical scores who played 6 ends to determine a result.

This was also our President's/Charity Day and we are pleased to say that, largely through the generosity of those competing & spectating, the club is able to send a donation of £250 to The Kent & Sussex Air Ambulance.

To add to the enjoyment of the afternoon we were treated to some splendid refreshments (courtesy of our President, Steve Carter) prepared by Carol Downes & Linda Townsend with help from several others.  Together with lovely weather, this gave us a very pleasant event. 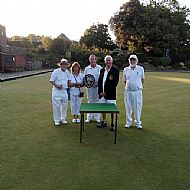 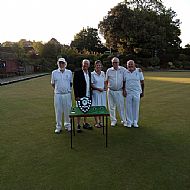 Saturday September 14th saw our annual Non-Trophy event held in beautiful sunshine.  This is open to those who have not won a club Singles or Pairs competition in recent years - regardless of experience.

The Ladies Final was fought between Norma Dalgleish & Rita Smith, with Norma emerging the winner.

The Men's Final, between Keith Jenkinson & Pat Smith was a cliff-hanger going to an extra end, resulting in a win for Pat.

Many thanks to our hard-working Markers: Sally, Keith, Sheena & Tom who covered a total of 20 games - which included mentoring some of our new bowlers in the skill of marking properly.

Our congratulations to the worthy winners and thanks to everyone playing or attending for making it an exceptionally relaxed & friendly day." 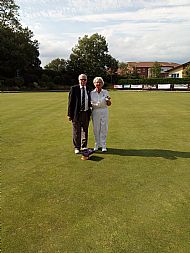 This competition for mixed pairs (in memory of Ken Ryall) was played on Saturday 3rd August.  11 teams entered & everyone played 4 preliminary rounds of 6 ends each giving us a winner from each of the 2 groups.  Those being, Mike Cooke & Edie Vine and Trevor Roberts & Wendy Peirce.  A splendid effort by Trevor & Wendy, being in only their second year of bowls.

The final was played over a further 6 ends with Mike & Edie coming out on top despite a late surge by Trevor & Wendy leaving all to be played for on the final end.

We were delighted to have Doreen Ryall there to present awards to the runners-up and winners.

The weather was kind all day and everyone enjoyed a relaxed & friendly competition. 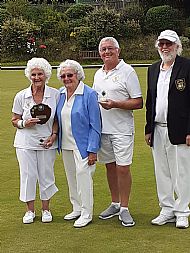 Today, Saturday July 6, the ladies entered the Harris Bowl competition.  This is the longest running competition in the clubs history.  The crystal bowl was presented to the club in memory of Mr and Mrs Harris and has been played every year bar one since 1993.

Today 12 ladies took part and enjoyed the sunshine, the atmosphere and the fun.  Each lady played 3 matches of 6 ends with three bowls.

The ladies were in three groups with a winner from each group and the highest scoring runner up coming together for the semi final.  Edie and Christine, Norma and Sheena played the two semi finals with Edie and Norma progressing to the final.  Edie was runner up with Norma the winner. Steve Carter presented the prizes to both ladies.

Special thanks to Tom, William, Keith and Steve for marking and for help in supporting newer members in the role of a marker.  Thanks to Phil for keeping the point score and shot record.  Tea was provided by Avis and Don part way through the afternoon and was greatly appreciated.  All in all a lovely afternoon with opportunities for everyone to talk, laugh and enjoy.

A closely fought final saw Mike Cooke overcome Pat Smith on the final end to win & the Trophy was presented by the Club Captain Bobby Bennett. 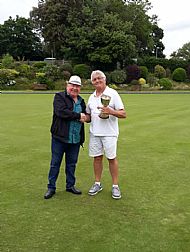 Saturday 29th June saw the hottest day of the year so far & greeted 14 pairs for this year’s competition. 4 new members took part and everyone had an enjoyable day’s bowling with good company. Some tight finishes in the group stages saw Sally Pulling & Pat Smith take on Frances Baker & Keith Pulling in the final. The former pair winning on the last end in the best match of the day. The Trophy was presented by Club Captain Bobby Bennett. 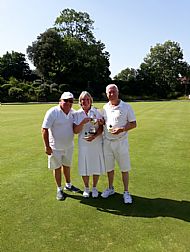