A great win for Hailsham.  We played Horam this afternoon (7 September) for the Goodwill Cup.  Last year Horam beat us to take the cup for the first time for several years.  So this year we felt a strong desire to regain the cup.

As it turned out, we managed a win by 55 shots to 42.  However, that score hides some significant differences in our performances.  On my rink, we were roundly beaten 5-16 due in large part to my ability to give the shot away with the last bowl when we were actually holding.  Dave Sykes lost narrowly 9-12 on his rink.  Bobby Bennett had a narrow win 13-11 on his rink.  But Graeme MacKinnon, and his team, had a great win 29-3.

The game was played in the spirit of Goodwill, as it always is.  Thank you to all of HBC team.

On a pleasant Bank Holiday Sunday, 18 club members took part in a triples competition.  The teams were drawn at random.

The six triples all played against the other five triples, with the scoring using the 100-up system.  We started at 11:00 and, with a lunch break after two rounds, finished the bowling at around 4pm.

After all the matches were completed there was a close run finish, with the runners up, John & Lynda Mack and Keith Jenkinson, missing out by 4 points to winners Kathy Pease, Ray Kirk and George King.  The winners received a bottle of wine each from Club Captain Peter Baker.

Following the bowling, we all remained behind for an "afternoon tea" organised by Carol Downes.  A huge thank you should go to Carol and her team for the wonderful repast they provided.

Also a huge thank you to all those who helped prepare the green and pack everything away afterwards, including help with the clearing up after the tea.

A great day had by all.

On a beautiful sunny Saturday, 18 members took part in a pairs competition.  They were divided into three groups of three pairs with each pair playing the other two pairs in their group over 8 ends.

After these group games, lunch was enjoyed by all, complying with social distancing as much as possible, with the majority enjoying fish and chips from John’s fish bar in the High Street.

After lunch, the winners of the three groups again played off against each other to find a winning pair.

After Lunch, the final games produced some very close results, with the outcome in doubt until the final bowl had been bowled.  The runners up were Kathy Pease and John Mack.  The winners, and Covid champions, were Pat Smith and George King.

We are hoping to organise another event at the end of August, so keep an evye open for details on the board at the club. 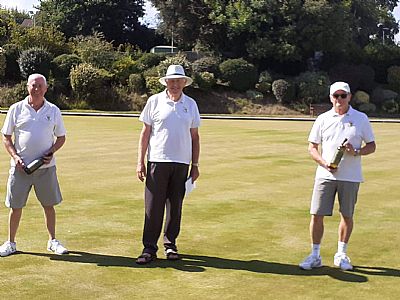 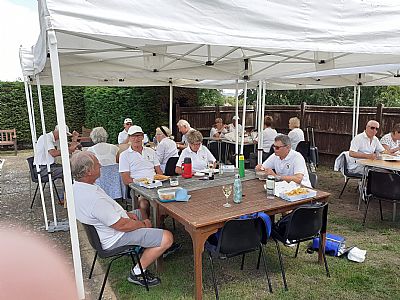 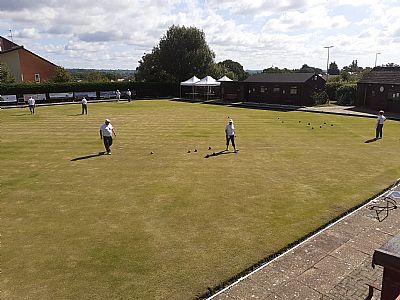